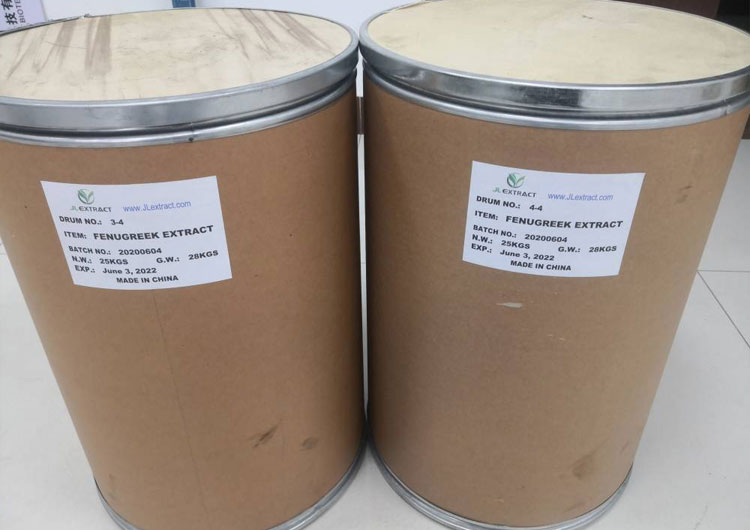 Fenugreek total saponins is extracted by ethanol from the seed of the plant Trigonella foenum-graecum, it is also called as Fenugreek Extract (CAS NO.55399-93-4).


Fenugreek total saponins exist in the plants of fenugreek seed; it could increase the testosterone levels of body by stimulating the body to produce luteinizing hormone and dehydroepiandrosterone. It has been used to treat sexual dysfunction, and to stimulate the muscle growth. Both effects are due to its effect of increasing the testosterone levels. The present study indicates that its main components, Furostanol saponins,formerly diosgenin saponin, plays a decisive role in the active ingredient. Aerobics athletes found that after taking the fenugreek saponins, their appetite had been improved. That is considered to be a good thing for those people who want to increase their weight.

Five studies completed by Dankook University in South Korea at the end of 2013 showed that all-natural fenugreek powder extract can improve growth performance, feed conversion rate, and reduce ammonia odor.
These three studies were done with growing, suckling and weaning piglets, and the other two were done with laying hens and broilers.

Pig studies have shown that adding fenugreek powder (Nutrifen) to the diet can significantly improve growth performance, nutrient digestibility, and reduce ammonia and hydrogen sulfide production compared to the control group. Adding this substance to the diet of chickens also improves the feed conversion rate, the digestibility of nutrients, and reduces the production of ammonia. The egg has a higher weight, a thicker shell, and the color of the yolk and the high-density lipoprotein cholesterol are also improved.

The active ingredient of New Ziben Fenugreek Powder is Diosgenin. Diosgenin is the only all-naturally produced steroidal saponin element. It has been proven to stimulate the pituitary gland to produce more natural growth hormone. Diosgenin is a mixture of various saponins, which can be found in fenugreek seeds. Saponins have been shown to inhibit urease activity in the digestive system of animals. This can effectively reduce animal ammonia emissions by inhibiting the decomposition of urea nitrogen into two independent components-ammonia and CO2.